Nearly all of the African-American families who had once been slaves of Rip Raps Plantation and the nearby Witherspoon Plantation (Coldstream) stayed in the community at the end of the Civil War and many of their descendents live in the community today. There remain a few sites of slave cemeteries that unfortunately bear no names, or sometimes only first names. The Historical Commission of Sumter County has made an effort to identify as many of these sites as possible. 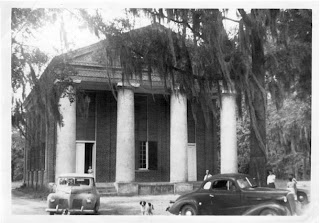 The freed slaves who had once been members of Salem Black River Presbyterian Church were recorded as members at the church and given the last names of their former masters. In 1861, the rolls listed 67 white members and 389 Negroes. The black members entered through the back door of the church and sat in the balcony.


As would be expected, at the end of the Civil War, the Session struggled with how to respond to the new status of their former slaves and the idea of total equality was not the order of the day. On December 9, 1867, two of the black members, George Muldrow and Hugh Cooper, came before the Session and asked that they and 104 members be dismissed to form the contemplated first (Colored) Presbyterian Church that was being endowed by the Northern Presbyterian Church.

Eventually, most other black members simply stopped coming to Brick Church and joined Goodwill Presbyterian Church, which was established one-half-mile south of Salem Black River Presbyterian Church on Highway 527. The membership of Goodwill soared to in excess of 640 people. White missionary teachers came from the northeast to help established the first school for black children. While the original Goodwill Church has been replaced, the Goodwill School House still stands to the right of it. Efforts are being made to restore it.

A point of interest is that no one in the family seems to have any information about the white missionary teachers who were obviously living in the community. They don’t know where they were living. They are not recorded as members of Brick Church. A logical guess would be that they attended Goodwill Presbyterian Church. No one remembers their parents or the aunts (who themselves were all strong advocates of education) ever making a reference to them. It is not hard to recognize the bitter feelings between the North and the South following the Civil War, and it is quite probable that the white community members had no intentions of stretching out a welcoming hand.

Goodwill Presbyterian Church went on to become the mother church to numerous Africa-American churches in South Carolina and, with an active and passionate membership, has produced an array of talented citizens who are now living throughout the united States.

Brenda Remmes
Brenda Bevan Remmes lives and writes near The Black River Swamp not far from where she was born. Her professional career evolved around education, starting with the Peace Corps in Cameroon, West Africa, and continuing with the public schools in Eastern North Carolina to adjunct faculty positions for the Schools of Medicine at The University of North Carolina and The University of South Carolina. Her first novel, The Quaker Café, is due for publication in March 2014 by Inkwell Publishing. She is currently working on her second novel, also set in the Quaker Community of Cedar Branch. Visit her web site at http://www.brendaremmes.com/